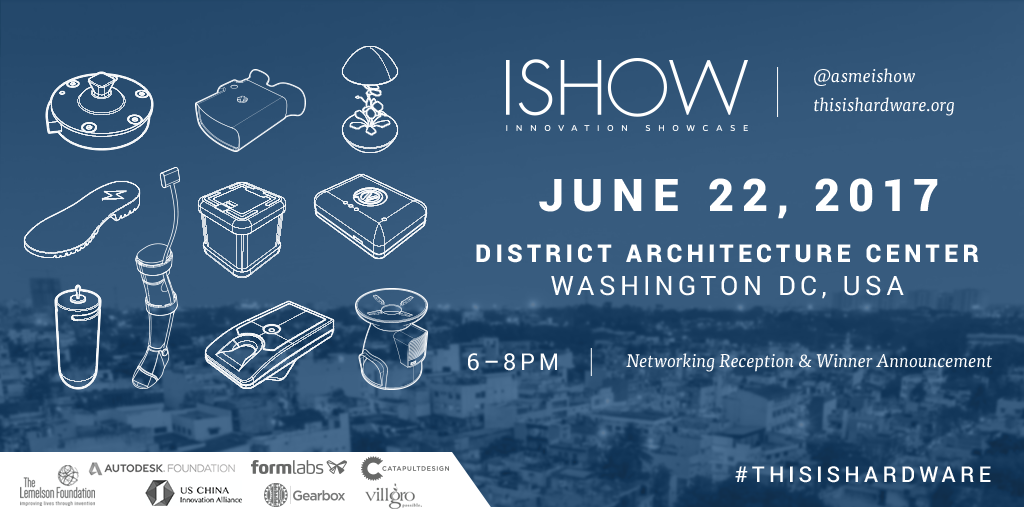 Ten social-minded American inventors will present their design prototypes in Washington, D.C. on June 22. They are among 28 finalists selected from more than 150 submissions from South Asia, Africa and the United States. Three grand prize winners have already been named in both Bangalore on April 27 and Nairobi on May 25.

Here’s a link to a description of the ten hardware designs whose American inventors will compete before an esteemed panel of judges on June 22 at the District Architecture Center, 421 7th St NW, Washington, D.C.:

This year’s finalists are vying for the $500,000 in cash and in-kind prizes that the organization has offered to help bring these socially innovative hardware-led solutions to market.

“ASME originally created ISHOW three years ago after our research showed a tremendous lack of support for hardware innovators seeking to enter global markets and make a societal impact,” said K. Keith Roe, president of ASME. “With this year’s entries among the most promising we’ve seen since ISHOW first launched, we’re confident they all have the potential to address some of the most challenging issues faced by mankind.”

The 2017 ASME ISHOW will feature a range of devices that offer the potential to make a transformational economic, environmental, and social impact in underserved communities around the world. During the competition, finalists will pitch their product prototypes to a panel of judges that include successful entrepreneurs, academics, and founders of venture-funded startup companies. The pitches will outline the engineering design attributes of the prototypes and also include a discussion of plans for manufacturing, implementation, marketing, and financing.

The winners selected in Washington, D.C. and the two other ISHOW events will share $500,000 in seed grants, technical assistance, design and engineering reviews and access to ISHOW’s partnership network.

“ASME congratulates all finalists,” noted Roe. “We celebrate their new ideas and innovations, which are pushing our collective knowledge frontier outward and solving problems to improve the lives of all people.”

For more information about the finalists and the ISHOW, please visit:

About ASME ASME helps the global engineering community develop solutions to real world challenges. Founded in 1880 as the American Society of Mechanical Engineers, ASME is a not-for-profit professional organization that enables collaboration, knowledge sharing and skill development across all engineering disciplines, while promoting the vital role of the engineer in society. ASME codes and standards, publications, conferences, continuing education and professional development programs provide a foundation for advancing technical knowledge and a safer world. For more information, visit www.asme.org.